skip to main | skip to sidebar

Has anybody seen the concretor?

It was Sunday morning, Sunday 10 September ... we've just had breakfast with Dad & Liz and post- bacon and eggs (or Salmon toast for John) we decide to head to the block to see what is happening. It has been a number of weeks so we think to ourselves .... "there must be a lot of progress at this point", especially seeing Linda (pronounced Lynndaah in a very bad English accent) keeps saying that they hope for the titles to be released in October.

Apart from, let's say, a few hundred metres of concreting for the footpaths (not on our side of the road mind you) not a dam thing has been done. Thus, no picture. So although it was quite disappointing that no progress was made on that front, we had confirmation that we now have a new neighbour to the right of us (left of us if you are looking front on at the house). Lovely couple (allegedly) building with Simonds. Let's hope THEY don't feel the need to write their names in the concrete when the bloke finally decides to get around to finishing.

However, while I may seem dismayed as to the lack of work being undertaken in the aforementioned area, we had confirmation today that final approval has been given on the house (including the variations) so it's all systems go (once the title is released).

Very exciting day so I plan to celebrate tonight with a glass of Cloudy Bay Chardonnay, and finishing off with a baileys on ice to seal the deal.

John will probably celebrate by beating 'Razor' ... number 1 on the Need for Speed Most Wanted List (XBox 360 fans will know what this means). For those that aren't geeky enough to even pretend to care, I can assure you that it is a big deal in our house :-))

On a side issue, we now have the Media Centre running to about 80% capacity of it's functionality. Was a very exciting moment on the weekend when we were able to get all HD or Digital channels. A more exciting moment came when I witnessed how you could pause live TV, get up and go to the loo, or get more alcohol .... and then go back to exactly the same place you were at before. All without having to actually tape the show!! Bloody marvellous.

Check out Andy's new blog about her new motorbike! 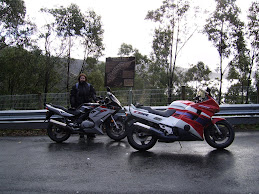